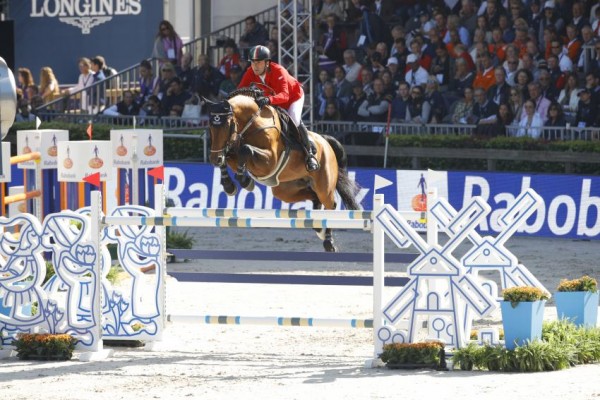 Chaclot, Oldenburg stallion bred by Gestut Lewitz, is from the amazing stallion Chacco-Blue, top jumper at international level with loads of great results such as the 3rd place in the Aachen Grand Prix in 2011 and also top breeder with more than 140, until now, offspring jumping at 1.60m in international classes.

Chaclot is very similar to Chacco-Blue, both morphologically and in his way of jumping and moving and at the moment he is one of the best stallion in Italy at the top level of the sport.

During the 2018 season, with the Italian rider Riccardo Pisani, Chaclot was double clear in the Nations Cup Final in Barcelona (SPA), was part of the Italian team that was second in the Nations Cup in Gijon (SPA) where he was also 7th individually in the GP; he was also part of the team for the CSIO5* in Hickstead (GBR) and placed 4th and 7th in the GPs of the CSI3* in Tubbergen (NED) and of the CSI4* in Gestereen (NED).

Chaclot’s mother Flying P. is from the hannoverian stallion Fly High I, from the great champion and stallion For Pleasure and the dam line from Loraine just produced horses jumping at international level. Pirett, horse with placings in the sport, is from the great stallion Pilot, the first stallion in the world whom offspring earned more than one million in prizes.